Our Fun Company Trip To Prague

On Friday afternoon, the company gathered all their items, sent off any final emails and got in their Ubers to Gatwick Airport to head to Prague.

Tereza, the Executive Assistant, had already allocated everyone their seats and divided it so that different departments mixed with each other. It was an especially great opportunity for the marketing team to mingle and meet everyone. Four out of the five of them were new members, having only been at Xanda for less than 3 months!

Xanda touched down at Václav Havel Airport and didn’t have long to wait as they got on their pre-booked coach to Hotel Giovanni. The hotels opening was paved with a glorious golden marble floor followed by a long winding staircase rising up towards the first floor. A shining statue of Mozart stood at the base of the pair of stairs with inscriptions, quotations and famous sayings by him printed across the walls of the rooms and hung in the walls of the common areas. The hotel exemplified how infused classical music is with this classical town. There was almost a rhythm to the lifestyle of the people, from the schedule of the local people to the chime of the famous astronomical clock in the square, Hotel Gionanni reflected the beat of the Nation.

The first night consisted of drinks at the bar, and stimulating games of chess in the hotels game room. It was a fun and quiet night for all with it ending in an early night to get ready for a fun day of sightseeing the next day.

Saturday began and after a delicious breakfast, the team didn’t stay in the hotel for too long. Everyone split up into smaller groups to go to different parts of town. The two most popular groups were the tours researched and organised by the head Graphic Designer, Tatiana, and Tereza. Overall, both groups got a comprehensive, fun and lively experience of Prague from different perspectives that they discussed with great joy afterwards. Others, who were more interested in experiencing the town and local life went off by themselves. Google maps, was a saviour.  A few people visited the square to experience the local culture and to see the much talked about Astronomical clock in the heart of the square while others went for a somewhat more relaxed dinner and drinks at the the Hotel U Prince rooftop terrace.

The day ended with the everyone gathering back up together and going for a company dinner at the quintessentially Prague cuisine, U Modré kachničky. While the company was served a selection of 3 different four-course hot meals, they were entertained by a live classical pianist who played a whole host of Czech songs, including Mozart. After the Duck foie gras with apples and saffron sauce, Roe deer ragout with mushrooms in baked apples and Venison pâté  with brandy and cranberry sauce were all finished, the second and third course were all eaten, it was time for dessert. As people were feasting on apple strudel, carrot cakes and chocolate cakes with raspberries, a number of the team gave a quick speech to express their gratitude and how Xanda has been a large part of not just their own personal career, but their wider life too.

The dinner ended with Alexander giving an impromptu piano performance before everyone set off for their last night in Prague.

But not before, a snowball fight.

The snow was up to their ankles and they couldn’t just leave the country without taking advantage of it! Risking getting their clothes wet, people picked up the snow and launched it at one another. One of the developers, Will, even took this opportunity to make a snow angel. Might not have been a wise idea in the midst of a raging battle! Sides were taken, people were targeted and clothes were soaked but all in all, everyone had an incredible time and it was time to go home.

Thanks for having us Prague, we hope to be back soon! 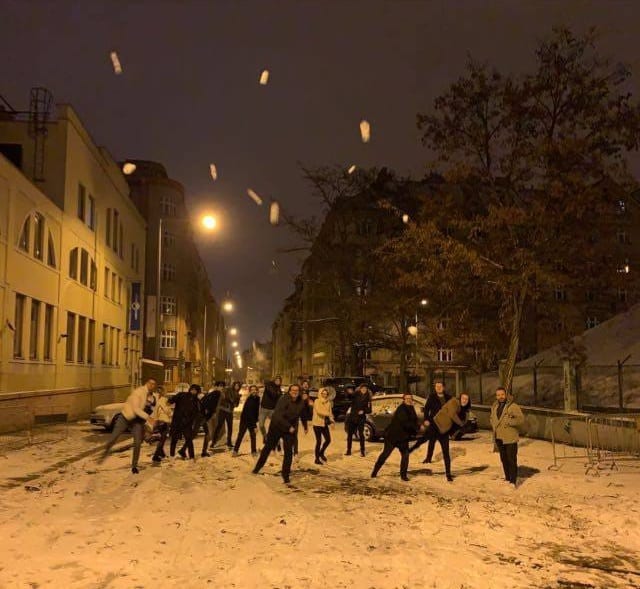